——————-
Update on June 22, 2020: The COC announced today the cancellation of its Fall 2020 season due to the pandemic, and the postponement of its performances of Parsifal for two years: 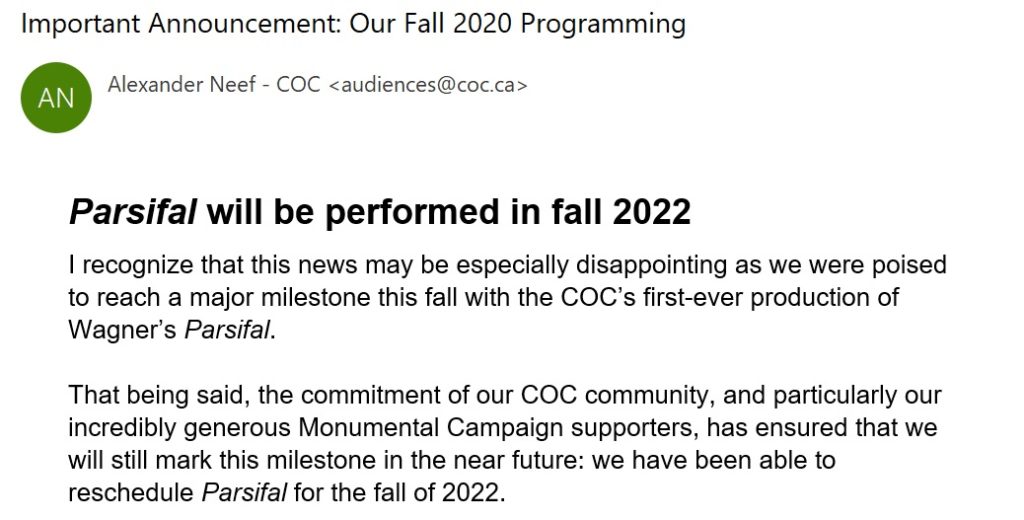 In the autumn of 2020 the Canadian Opera Company plans to perform Parsifal, which has not been staged in Toronto for 115 years. Inspired by this singular occasion, I decided to research the history of Parsifal performances and reception in Canada. Parsifal has not been seen very often in Canada—once in Toronto and three times in Montreal, for a total of 14 performances—but it has had a big impact on musical life here in other ways, especially early in the 20th century. This research project mushroomed into a document of over 14,000 words and an accompanying compilation of documentary sources that runs to 38 pages. These are available as PDF files by clicking here (the article) and here (the documentary sources). This website post provides a brief summary of this research.

The premiere of Parsifal in Bayreuth on 26 July 1882 was the subject of extensive coverage in Canadian newspapers, attesting to the fame that Wagner had attained in North America during his lifetime. Wagner wanted Parsifal to be given only at the Bayreuth Festival Theatre, and after his death in 1883 his wish was strengthened by the force of law with the adoption of the Berne Convention copyright agreement in 1886. However, only staged performances were covered by copyright protection; excerpts from the work quickly entered the repertoire of orchestras, soloists, and choral groups in Canada, as elsewhere, and all manner of adaptations of both the music and the drama flourished as well.

Toronto first heard the Prelude from Parsifal just four months after the Bayreuth premiere of the work, when it was played by the (Leopold) Damrosch Symphony Society from New York in a concert given in the pavilion of the Horticultural Gardens (now the Allan Gardens) on 1 December 1882. In the late 19th and early 20th centuries, excerpts from Parsifal were presented in Canada by visiting US orchestras led by Walter Damrosch (Leopold’s son), Emil Paur, Anton Seidl (who had assisted Wagner in preparing the premiere of the Ring cycle at Bayreuth), and Theodore Thomas, among others. Thomas presented a series of five concerts in Montreal in June 1884 that included many Wagner excerpts; although nothing from Parsifal was programmed, the concerts featured three singers who had premiered leading roles in Parsifal at Bayreuth just two years earlier: Hermann Winkelmann (Parsifal), Amalie Materna (Kundry), and Emil Scaria (Gurnemanz). The Montreal composer Guillaume Couture reviewed the concerts with great enthusiasm and wrote a series of three articles about Wagner to acquaint local audiences with the composer. Twenty years later, Walter Damrosch brought a touring program of extensive selections from Parsifal in concert form to Toronto, given in Massey Hall on 5 April 1904. In addition to conducting the excerpts, Damrosch gave explanatory comments to link the scenes together and illustrated the principal leitmotifs on the piano. The cast included the Quebec baritone Francis Archambault as Amfortas.

While these orchestral visits were mostly confined to Toronto and Montreal, visiting concert bands under leaders such as Giuseppe Creatore, John Duss, Frederick Neil Innes, and John Philip Sousa toured to smaller centres as well, and brought Parsifal excerpts to audiences across Canada, from Ottawa to Vancouver, in the period between the late 19th century and World War I. Arrangements of music from Parsifal were soon being performed by choirs in concerts and in Sunday church services, by organists and pianists in recitals, and by amateurs at home. Canadian and visiting musicians lectured about Wagner and Parsifal, often for women’s musical clubs, illustrating their talks on the piano, or sometimes with the help of the Aeolian Orchestrelle, a self-playing reed organ.

Numerous spoken play versions of Parsifal criss-crossed North America. A certain Bruce Gordon Kingsley even offered a one-man show version of the work, in which he related the story, played excerpts on the piano, and unveiled nearly 100 paintings of the drama. The Victoria Daily Times (7 June 1913, p. 5) improbably claimed in 1913 that Kingsley’s performance “is conceded by both public and critics to equal the grand opera rendition itself”. The 50-person Martin & Emery company toured its four-hour stage play version of Parsifal in 1906 and 1908, with many stops in Canada. Parsifal was also made into a silent film twice, by the US director Edwin S. Porter in 1904, and then by the Italian Mario Caserini in 1913.

The Prelude and Good Friday music from Parsifal in time became standard repertoire items for orchestras across Canada, and other excerpts were also heard on occasion. Frank Welsman’s Toronto Symphony Orchestra gave Act 1, scene 2 of Parsifal in Massey Hall on 19 January 1910 with the National Chorus (trained by Albert Ham). In Winnipeg, local performers mounted excerpts from Parsifal in 1925 (the Grail Scene, conducted by Arthur Egerton), 1931 (Good Friday Music), and 1934 (a choral excerpt). Luigi von Kunits led the Toronto Symphony and two vocal soloists in three excerpts from Lohengrin and six excerpts from Parsifal in a performance in 1930 that was heard from coast to coast in Canada on the CNR radio network. The Vancouver Symphony Society performed the Prelude from Parsifal for the first time on 3 February 1935 under Allard de Ridder, and repeated it later that same year. Extensive excerpts from Parsifal under the Montreal-born conductor Wilfrid Pelletier were heard in the closing event of the Montreal Music Festival on 3 June 1938; the concert included the start and finish of Act 1 and all of Act 3. Concert versions of Act 2 from Parsifal have been given by the Kitchener-Waterloo SO in 1988 with Jon Vickers (in his last public performance ever) as Parsifal, Gail Gilmore as Kundry, and Claude Corbeil as Klingsor; and also by the Montreal SO in 1991 with Siegfried Jerusalem as Parsifal, Jessye Norman as Kundry, and Oskar Hillebrandt as Klingsor.

The prohibition on stage performances of Parsifal applied to those countries that were signatories to the Berne Convention. The USA did not join the Berne Convention until 1988, and so was not bound by the Parsifal ban. Excitement about Parsifal rose to a fever pitch in North America with the publicity surrounding the first Metropolitan Opera production of the opera, which opened on Christmas Eve, 1904 at 3:00 pm. A legal case had been brought by Cosima and Siegfried Wagner to halt the Met production, but it was unsuccessful. Newspapers across Canada reported on the legal proceedings at length, and on the Met production. In the wake of the huge interest in Parsifal that the Met production generated, a US impresario named Henry W. Savage took a touring production of Parsifal on the road to 45 cities during the 1904–05 season, including stops in Toronto and Montreal in April 1905. The 200-member Savage company production was closely modelled on the original Bayreuth staging, except that the work was sung in English. An idea of the look of the production can be gleaned from various widely circulated illustrations of it (see below). The Toronto reviews of the Savage company production singled out the “Canadian” tenor Francis Maclennan, who sang Parsifal, for praise; he was born in Michigan, but had moved to Collingwood with his parents, and  reviews in Canadian newspapers of his performances throughout his career consistently claimed him as a Canadian. His wife was the eminent soprano Florence Easton, who was born in England but raised in Toronto, and was later to become a famous Kundry.

Toronto has not seen another staging, or indeed a complete live performance, of Parsifal since the Savage company left town in April 1905. Montreal, however, had the opportunity to see it again in 1954, sung in German this time, performed by a local orchestra and chorus, with the Canadian baritone Napoléon Bisson as Klingsor, and the other major roles taken by soloists brought in with the cooperation of the Metropolitan Opera: Ramon Vinay (Parsifal), Rose Bampton (a last-minute replacement for Doris Doree as Kundry), Martial Singher (Amfortas), and Dezső Ernster (Gurnemanz). The five performances were conducted by Charles Houdret, a Belgian musician who had recently moved to Montreal. The production was modelled on the New Bayreuth aesthetic, with a mostly bare stage and scenic effects created by lighting. The staging enjoyed the twin benefits of being both au courant and inexpensive to mount.

A complete concert performance of Parsifal was given on 6 August 2017, as the closing event of the 40th Lanaudière Festival just north of Montreal, led by the Canadian conductor Yannick Nézet-Seguin. It was a trial run for him, before conducting in 2018 the Metropolitan Opera production by the Canadian creative team of François Girard (director) and Michael Levine (set designer), the same staging which the COC plans to mount in the fall of 2020.

Some Canadian singers and their Parsifal roles

A number of Canadian opera singers have excelled in international performances of some of the leading roles in Parsifal. Notable Canadian Parsifals have included Edward Johnson (the first to sing the role at La Scala), Paul Frey, Ben Heppner, and most famously Jon Vickers, who sang the role at Bayreuth, Chicago, Covent Garden, Geneva, the Met, Paris, and Vienna. Two who have sung Kundry are Florence Easton (at the Met in the 1920s, in both English and German) and Odette de Foras (at Covent Garden in 1931, during her brief career). The baritone Morley Meredith from Winnipeg sang Klingsor at the Met 22 times during his long career there, and the bass Robert Pomakov from Toronto is set to make his debut in that role in the COC production. Three Canadians have sung Amfortas: Brett Polegato made his role debut in the 2017 Lanaudière concert performance; Gerald Finley has sung it at Covent Garden, Vienna, and in concert with the Berlin Philharmonic; and George London, one of the greatest interpreters of the role, sang it at the first Bayreuth production after World War II in 1951, and on many other occasions both there and at the Met.

Canadian scholars have written about Parsifal with eloquence and insight. One of the best short introductions to the work is by Father M. Owen Lee, who often gave intermission talks during Metropolitan Opera broadcasts. One such talk on Parsifal was later published in his book First Intermissions (1995) and then in expanded form in The Olive-Tree Bed and Other Quests (1997). The eminent literary scholar Northrop Frye gave an insightful talk on Parsifal for the Toronto Wagner Society in 1982, published as Chapter 27 in his Complete Works, vol. 17. William Blissett, Linda and Michael Hutcheon, and Jean-Jacques Nattiez have all written imaginative articles or book chapters about Parsifal. The Canadian-American musicologist William Kinderman is the author of the most in-depth study in English, the book Parsifal (Oxford UP, 2013), and with his wife Katherine R. Syer he also co-edited A Companion to Wagner’s Parsifal (Camden House, 2005), a book of nine essays about the work.

The Vancouver conceptual artist and musician Rodney Graham (b. 1949) created a series of art works inspired by Parsifal that are in the Tate collection and are well worth a look online here. And finally, to end on a note of levity to offset the serious nature of Parsifal, here is a poem by Healey Willan, from the Arts and Letters Club of Toronto Monthly Letter (Feb. 1962): p. 4.

Though Liszt and Wagner ne’er excelled
In writing oratorios,
They both achieved real eminence,
When young, as gay Lotharios.

But later on, to make amends
For doings somewhat shabby,
Wagner wrote his Parsifal
And Liszt became an Abbé.